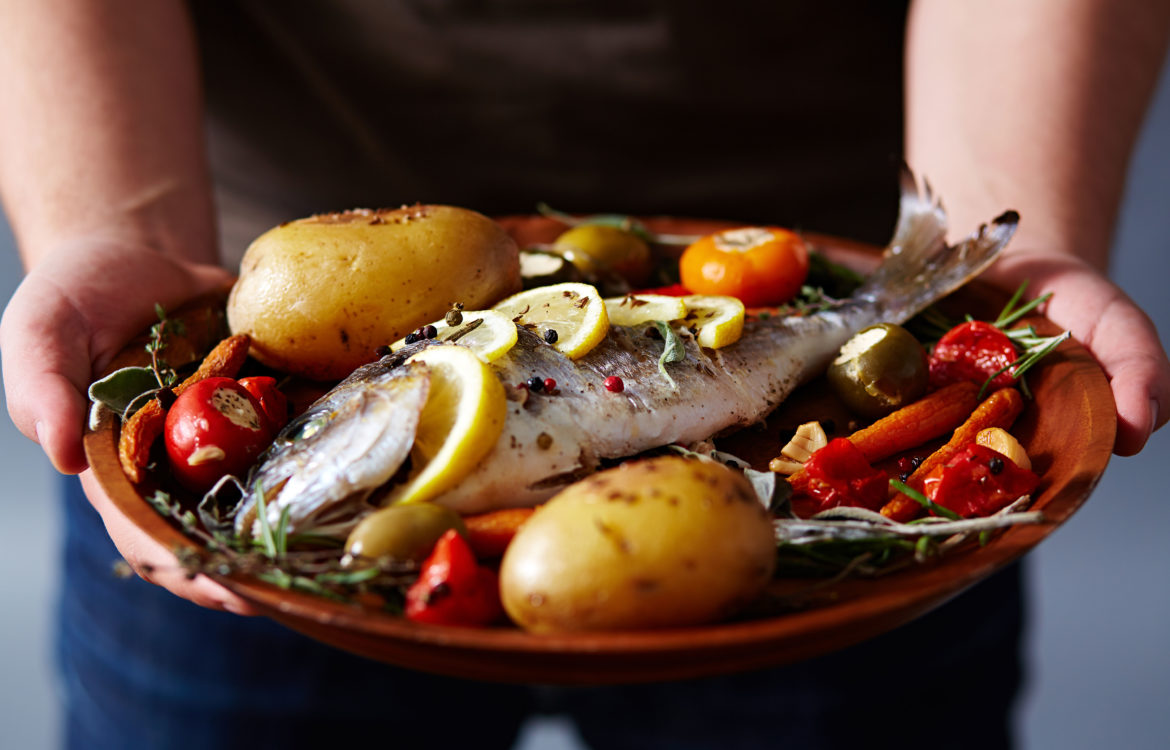 If you’re visiting Spain on holiday or for a short trip, it’s more than likely that you won’t be cooking much, if at all. You’ll probably be eating out every day, and hopefully be sampling what this country has to offer in terms of its gastronomy, wine and culinary delights.

If that’s the case, you shouldn’t return home without having tried at least one fish dish, more if you are a lover of things that live in the sea; that is unless, of course, you have an allergy to fish or seafood, and then, unfortunately, you’ll have to do without.

The Spanish pride themselves on their cooking, and especially the use of the best quality and fresh ingredients that are locally grown and sourced, or found swimming in nearby waters.

Most tourists and holidaymakers flock to Spain’s coastal areas, which is where you’ll find fish dishes in abundance on practically every restaurant’s menu.

The popularity of fish is also evident if you take a stroll through the indoor markets where numerous stallholders display a wide range of species laid out over ice for all to see. All of it will have been brought in fresh that morning from local waters.

In the UK and many other northern European countries, eating fish is not nearly as common as it is in Spain, so seeing what’s on offer at the market or even on a menu is probably quite baffling as we are likely unable to identify a type of fish on sight or even from its name.

This guide aims to inform you about some of the most popular types of fish eaten in Spain, so that when presented with a choice, you’ll be able to make your order confident that you’re going to enjoy what’s been placed in front of you!

Health specialists recommend the consumption of oily fish at least once a week, as it contains omega-3 fatty acids, which help protect the heart and prevent heart disease, and is a good source of vitamin D.

• Anchovy: The anchovy is usually prepared and served in two different ways, which is why it often has two different names and is often confusing for foreigners. Boquerones are anchovies, but not the extremely salty ones that we are used to. These are called anchoas. The boquerones that we see on a restaurant menu are either dipped in batter, fried and served hot, or cold and have been marinated in vinegar, olive oil and garlic. The hot fried ones, which are delicious and extremely popular, are what we would call whitebait, which is, in fact, the collective name for the immature fry of fish, typically between 25 and 50 millimetres long.

• Sardine: Sardines, or sardinas, are also one of the most popular fish eaten in Spain. You can order them by the dozen or half dozen and they are often eaten as a tapa and are extremely inexpensive. Fresh sardines that have been grilled on an open fire, sprinkled with rock salt and served with a wedge of lemon are the best. Sardines are silvery-blue in colour, about 6 inches long and have black spots just behind the gills. They are best grilled, but can also be fried or baked in a casserole with potatoes and wine.

• Mackerel: This oily fish, which is quite popular in the UK, is known as caballa in Spanish. It is a blue fish with dark, wavy lines along its back and a silver-coloured belly.

The Spanish like to flour this fish and then fry it, although it is also great baked or grilled. The Spanish version of this fish is called estornino and is sometimes sold as caballa. It can also be served cold as an appetizer, marinated in vinegar, herbs and onion.

• Tuna: Fresh tuna (atún) is often found on menus in Spanish restaurants and also in the supermarkets. It is generally sold in steaks and is a popular substitute for meat as its flesh is very firm with a strong texture. It is dark brown in colour and is great grilled, baked or even pot-roasted in wine.

• Bonito: Wherever you see tuna, you are also likely to see the word ‘bonito’. As well as being the word for ‘pretty’, bonito is also given to a number of fish from the tuna family. It is also a big, meaty fish that is eaten a lot in Spain.

This type of fish is found in all good restaurants and usually under the most expensive price range. This fish is of excellent quality and abundant in Spanish waters.

• Gilt-head: This is the most expensive fish in Spain of the sea bream variety, and probably the nicest one in flavour. Known as dorada, it is often served whole and baked in a sea-salt crust. Fresh, it is pink-gold in colour with gold spots around the head. It is best cooked by grilling and baking.

• Red bream: This fish is also very popular in this country and is even served on Christmas Eve for the traditional family meal. It is pinkish-grey in colour, with a large black spot on its upper body. Besugo is best served char-grilled on an open fire.

Several types of flat fish are also quite popular in Spain and there is a large variety of them. Some of these are inexpensive and eaten a lot over here, whilst others that are common to the UK are not found in Spanish waters and have to be imported.

• Turbot: This is one of the most expensive species of fish on the market, mainly because it is so scarce. The flesh is white and the fillets are usually poached and served in a nice sauce.

• Plaice: This fish, commonly eaten in the UK, is not so common in Spain, although you will find it in most markets. It is known as solla in Spanish.

• Sole: If you go to a restaurant and see ‘lenguado’ on the menu, you’re likely to be served any variety of flat fish that looks like a sole, some of which are fantastic, and others which are not.

• Monkfish: Monkfish has become extremely popular in British restaurants lately and is very common in Spain. Its name is odd-sounding (rape) and it is not the most attractive of specimens either. It also has a distinctive shape, with a big head and slim tail. The flesh is sweet-tasting and firm, and can often be substituted for lobster in any recipe.

Mullet is a common species of fish in Spain as it is found globally in temperate and tropical waters.

• Red mullet: This is a smallish-sized fish that is a light pink colour. The flavour of red mullet, or salmonete as it is known in Spanish is quite delicate and light. The liver of this fish is considered a delicacy and is usually left intact when the fish is cleaned. Salmonete is very popular in Spain and in other Mediterranean countries.

• Grey mullet: This fish is also common in Spanish markets but is different to the red mullet in that is has a strong, earthy and distinctive flavour that is not to everyone’s taste. This fish is known as lisa in Spanish and is sometimes confused with sea bass, although it is cheaper in price. Lisa is best served with an acidic sauce containing lemon, white wine vinegar and garlic.

• Sea bass, which is known as lubina in Spanish, is a silvery, shiny fish with a white belly that is very popular in Spanish restaurants and markets. It has white, firm flesh and a delicate flavour. It is generally served whole after being baked in the oven, or grilled, and is delicious simply served with salt and lemon.

• Grouper: This fish is usually found in the frozen fish section of the supermarket rather than in the fresh market with fresh produce. It is known as mero in Spanish.
Hake and similar

• Hake: or merluza is probably the most popular and most widely used fish in Spain. It is also very cheap to buy. Fish fingers, which we make from cod in the UK, are made from hake in Spain, as merluza is found abundantly in Spanish waters. You will find it in all restaurants, supermarkets and fresh markets and it is also very popular due to its versatility when it comes to cooking, as it is delicious however it is prepared.

• Cod: Cod is not found in the waters around Spain. You will, however, see it in the supermarkets and markets, but in its salted and dried form. This way, it is used in cooking quite a lot and form the basis of a large number of excellent dishes, particularly in the north of Spain.

• Skate: This is also known as ray in English and raya in Spanish. You won’t generally find it in the supermarkets here, but you will see it spread out at the market. The large wings are the part of the fish that is edible, although its flavour is very strong.

• Swordfish: This is a popular fish in Spain and is great for those that are not too keen on fish, as it is very meaty in texture and has a nice taste. It is usually sold in steaks and is delicious grilled or baked and served simply with lemon and salt. In Spanish it is known as pez espapda or emperador (emperor fish).

• Trout: Trout or trucha is quite popular in Spain as it is farmed quite a lot all over the country. You will find it sold whole in supermarkets and markets or cut into fillets.

• Salmon: Salmon (salmon) is fished from the waters of northern Spain and is also imported from Norway or Canada. This is also a popular fish that you will find in all markets, restaurants and supermarkets.