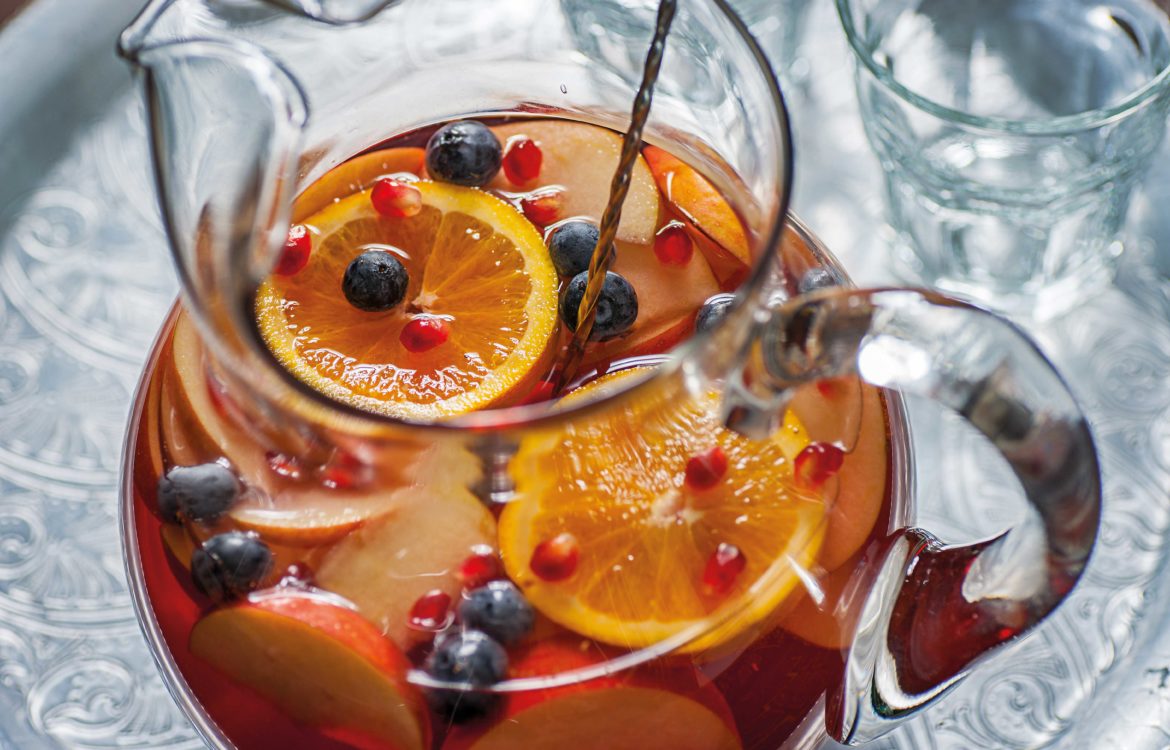 Everyone has heard of the drink ‘sangría’ and associates it with Spain. It’s a delicious and refreshing alternative that many visitors and their hosts enjoy all-year round. What you won’t find is one definitive recipe. Instead sangría is as individual and varied as the Spanish people.

It can be made with red or white wine, with fruit juice or cordial, with lemonade or cava, with brandy or rum – take your pick. It should always be served chilled and with some fresh fruit for you to scoop out and savour. Enjoy a jarra (jug) of the stuff on a sunny day on a terrace with views. It’s perfect with, or without, paella but be careful – the fizz can disguise just how strong this fruity concoction can be.

Ask people what they know about Spain and your average person is likely to mention paella, sangría and flamenco in their answer. Sangría is the drink most likely to be associated with the country, and yet its drinking, by the Spanish at least, is not as common as most people think. In some localities you are much more likely to see a jug of beer (una jarra) on the table than one of sangría.

Usually sangría is made with red wine which gives it its colour and presumably also the reason for its name. The name ‘sangría’ comes from the word for blood in Spanish – sangre – and means bloodletting. However, this famous drink is not always made with red wine and in parts of the country you will find a version made with white wine, which might be called sangría blanco or clarea.

According to records, sangría does have something of a history. It’s believed to have been invented by the Romans as they travelled through Iberia. Rather than drinking the water, which was considered to be rather dodgy, they are thought to have mixed the water with wine to kill off any bacteria. Perhaps a few more ingredients were added, including fruit, herbs and spices to make it more enjoyable and refreshing.

Since those days sangría’s popularity has remained and can now be drunk in most countries of the world.

There is no one accepted recipe for sangría. Rather, it is a home-made concoction with one or two key features. Firstly its base  liquid is wine. Whether this is red or white, it’s a staple and most often than not it’s red wine that will be used.

Secondly, it has a fruity flavour. Jugs of sangría and large glasses are usually decked with some floating fruit which not only improves the taste but adds to its exotic appearance. Fruit juice might be added to increase the flavour and to dilute the alcohol a little. To make the drink sweeter, sugar may have been included.

Other than that, the ingredients vary but usually consist of a spirit of some kind such as brandy or rum. You can expect there to be some ‘fizz’ in there somewhere – anything from lemonade to champagne. But be warned, the carbon dioxide can disguise its alcoholic strength which is likely to be between 4.5% and 12% volume.

Even with this approximate guide to what sangría might contain, there are variations. For example, a clarea will be made with white wine and might also have cava or even cider in it. You can order sangría in a jug, which is usually specially designed for the drink with a lip that prevents the fruit from tumbling into your glass. However, it’s not uncommon to have the option of ordering just a glass, but watch out – it’s usually a large one.

Of course, sangría should be served chilled and is a perfect accompaniment to just about anything. As the cliché goes, it does work particularly well with paella but any tapas alongside and you’ll consider making Spain your home (if you haven’t done so already).

Where to find the best sangría

Finding the best sangría is largely a case of trial and error. You might ask before ordering, what ingredients go into making their ‘traditional sangría’ and base your decision on the answer you’re given. If you are very picky, then you will also want to know what make of red wine is being used. This is very much a matter of taste.

You should also be aware of sangría’s similarity to tinto verano. This is another popular drink, particularly in the summer and its  name means summer red wine. It can have a very similar appearance to sangría but is made using sweetened soda water. There are occasions where one is passed off as the other; usually tinto verano masquerading as sangría.

Look online for recommendations and in most of the larger towns and cities you will find at least a few bars that are considered to be specialists, some even calling themselves sangría bars. Wherever you stop to take a drink, you can reflect on whether sangría deserves or not to be known as the favourite tipple in Spain.