Spanish tapas, the temptation in a single bite

Spanish tapas, the temptation in a single bite 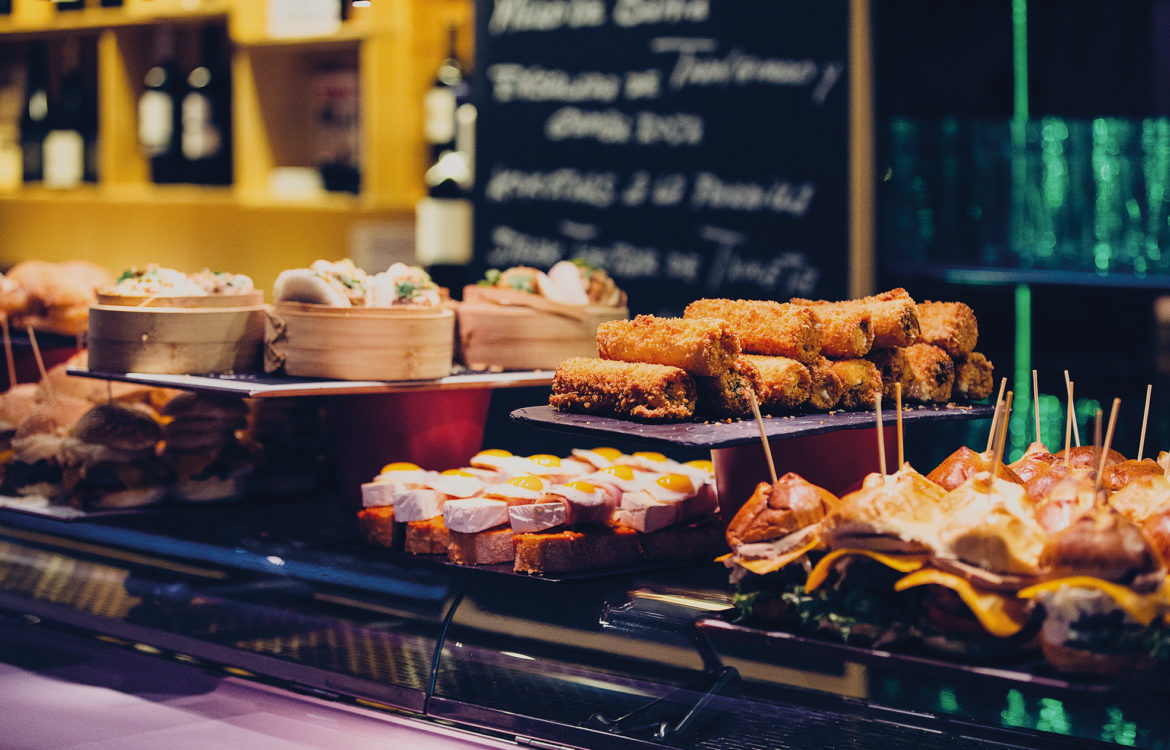 If you have ever visited Spain and not tried some ‘tapas’, you haven’t lived. Well, that’s obviously an exaggeration, but you will have definitely missed out on a wonderful experience that is one of the defining traditions of living in this country.

As someone who actually prefers the starter of a meal rather than the main meal itself, tapas are right up street. Some might accuse me of being unfocused, indecisive, flighty, or even greedy, as in a restaurant I find it difficult to choose just one dish and be happy with my choice.

However, I like to think of myself as a lover of good food, always keeping an eye out for delicious dishes that I can easily recreate in my own kitchen, which is why I have to try them all! Not only that, but I prefer to eat little and often, so there’s no way I can go wrong with a good selection of tapas with my friends.

What exactly is a ‘tapa’?

For those that have never visited Spain or are unfamiliar with the word ‘tapa’, a tapa is a small serving for one person of a hot or cold dish that is usually inexpensive and quick and easy to prepare and serve.

For the most part, there are only one or two main ingredients to the dish.

The word ‘tapa’ literally means lid or cover in Spanish.

Tapas are often consumed with a lovely glass of wine or beer, and in the south of Spain, it was traditionally an accompaniment to a  nice glass of sherry.

Tapas, contrary to what many people think, are not eaten at traditional mealtimes. They are actually a snack that is consumed before the two later big meals of the day. You would generally have tapas around 12pm and maybe 7pm, before lunch and dinner.

Traditionally, people would also always eat tapas standing up, propping up a bar somewhere, and not sitting down, which is customary these days. These small dishes also used to be free of charge and were a token of gratitude from the bar owner for choosing his bar to buy a drink. There are still parts of Spain in which you will never be charged for a tapa, but these are becoming increasingly hard to find in most regions.

The majority of historians claim that the tapa originates from southern Spain, in Andalucía, to be exact. They tapa was apparently a midday snack for field workers who worked long hours and needed refuelling because the gap between breakfast and lunch was so long.

It is said that the tapa was born in the sherry-producing areas of the region and that  people used to eat the tapas as an accompaniment to their glass of sherry.

Bar owners used to cover their customers’ sherry glasses with a piece of bread in order to prevent flies from dropping into the glass. This then developed into covering the glass with a plate containing a small chunk.

Tapas aren’t meant to be eaten as a main meal, although many people these days do get together and go to a restaurant, ordering a couple of tapas each and then sharing between everyone present.

The way in which to get the best experience is to bar-hop from one place to another, sampling just one tapa and one drink in each establishment before quickly moving on to the next place. It’s a great way to explore an area, try different foods and styles of cooking, and exercise at the same time!
On the menu

The way in which tapas are displayed and advertised ranges from place to place. In some bars, the range of tapas are presented to the customer on the counter in refrigerated and covered containers. You basically have to inspect each one to see which takes your fancy and then order from the waiter behind the bar. If you don’t speak Spanish, then pointing will usually get you what you want.

Other bars will hang a large blackboard on the wall behind the bar which has a complete list of all the tapas written on it, or they may display the board outside as a way of attracting customers.

Few places will make the procedure of ordering tapas easy by having a tapas menu, but they do exist. And then there’s also every non-Spanish-speaking person’s nightmare when there are no displays, no boards, no menus, no lists and you have to ask the waiter, who will then reel off a long list of about 15 tapas off the top of his head and you’ll have to choose from that!

Remember that a tapa is a portion for one person, but a portion will serve two or three. A portion is also much more expensive, so don’t get caught out otherwise you could be faced with an expensive bill at the end of the meal.

The great thing about tapas is that they come in all sorts of shapes, sizes, temperatures and flavours. Most of the regions have their own specialities that you wouldn’t find in any other part of the country, and these would be as well as the ones like tortilla española (Spanish omelette), which you would find in every bar in the country.
The possibility for the number of existing tapas is immense, but the general rule for those that prepare them is that the ingredients are inexpensive, the tapa can be prepared quickly and without fuss and can then be left in the refrigerator for most of the day without spoiling. The old-style of tapa was always really humble and made with fantastic natural and fresh ingredients.

The further north or inland you go, the spicier the tapa. They are usually served hot in the colder climes, too. In the northern part of Spain you would most likely be served something like patatas bravas (spicy fried potatoes), pimientos rellenos (stuffed peppers), or a meat-based tapa such as albóndigas (meatballs) or callos a la madrileña (pigs’ trotters Madrid-style).

Along the coast, of course, you’re most likely to be served a tapa containing some sort of fish or seafood, for example, gambas al ajillo (garlic prawns), boquerones fritos (whitebait) or calamares a la romana (squid rings in batter).

And, further south you’re more likely to come across cold tapas, especially in the summer. This could be anything from a few olives to jamón serrano (serrano ham) or ensalada murciana (Murcian salad).

I carried out my own survey amongst my friends and the most popular choices of tapas were actually the most simple, the most rustic and the most unpretentious ones.

In fact, out of a list of 15 tapas, the top three were all potato-based dishes.

Tortilla – the Spanish omelette. This is generally served in a gigantic-sized doorstop triangular proportion, and great if you are really hungry. The Spanish omelette is so simple, yet so delicious and consists of just fried onion and fried potato which are bound together by seasoned eggs. Truly one of the tapa greats!
Ensaladilla rusa (Russian salad) – There are many variations to this cold tapa, which is one of the most popular in Spain. The most common ingredients are potatoes, peas, carrots and mayonnaise. Often tuna is added too.

Patatas bravas (spicy potatoes) – This is another favourite and generally appears in every bar. It’s basically fried diced potatoes served with a delicious hot and spicy sauce over the top made from tomatoes, chili, garlic, onion and parsley. Some mix the sauce into the potatoes, while others serve it on the side as a ketchup-type dipping sauce. The bars that are not bothered about serving their customers good, home-cooked food will offer you a hot sauce from a bottle, which completely ruins the experience.

Aceitunas – Olives. These also come on many shape and form. They may be plain or stuffed with anchovy or almonds, for example, or marinated in herbs, oil and vinegar.

Albóndigas – Meatballs. This is a hearty dish of meatballs served in a spicy tomato sauce.

Chorizo a la sidra – Spicy sausage in cider. Slices of chorizo which have been baked in cider or white wine.

Boquerones – Anchovies. These can be served cold and marinated in vinegar, olive oil and herbs, or hot after being fried in flour. We know the latter as whitebait.

Gambas a la plancha – Whole prawns. They have been grilled served with salt and lemon.

Pulpo a la gallega – Octopus Galician style. This is a dish of sliced boiled octupus served on a wooden platter and served with salt and paprika.