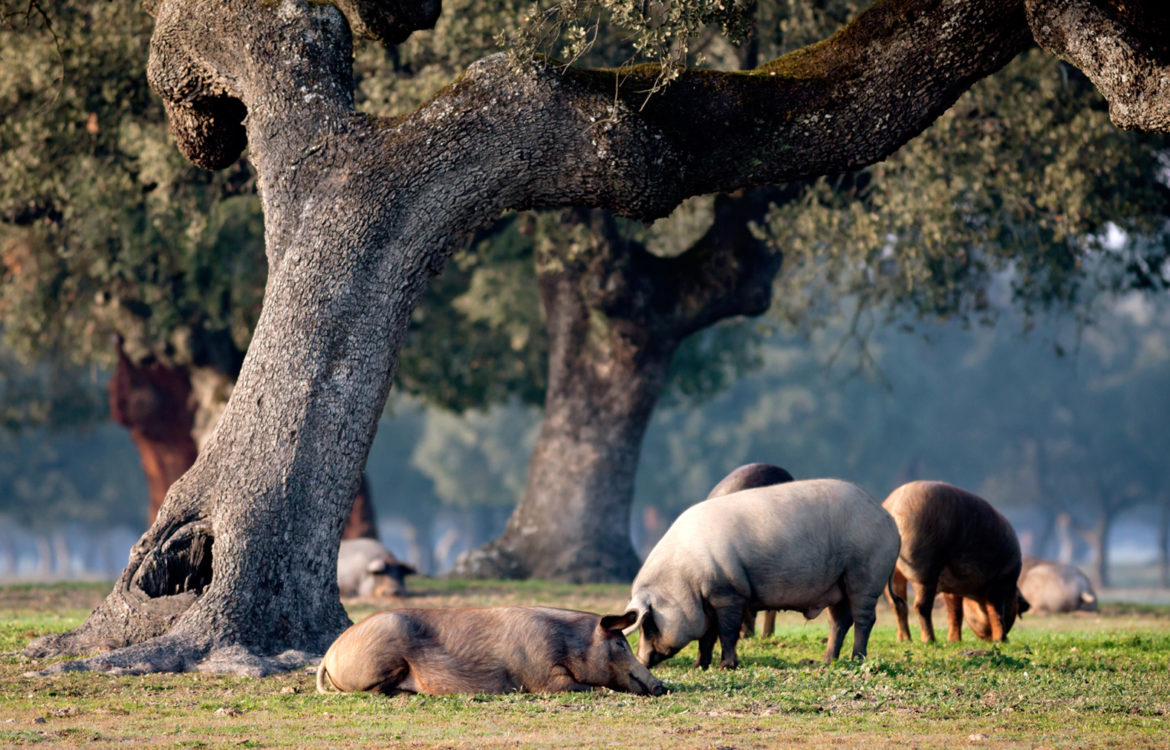 It’s one of the trademarks of Spain. A large dish of finely sliced ham served at any meal and at any time of year. There are few people could claim to dislike this traditional delicacy but an equally small number are aware of the full language and lore of the jamón ibérico making process. Now there is a tour you can take to bring you up to speed on this fabulous and legendary food.

Visit to any major supermarket in Spain around Christmas time and you can’t help but be overwhelmed by the number of different ‘hams’ on show. Who would have thought that the back leg of a pig could command such floor space in a hypermarket? But it does.

The Spanish ‘jamón’ is at the core of Spanish society. Everything about it has been developed into an art form. The Iberian ham that ends up lovingly cut and served has not recently been running around searching for acorns. The process of producing a good ham is a long and intricate one the details of which can be fiercely guarded.

For the uninitiated foreigner, this is a completely new body of knowledge to take in and once you begin, it is a truly fascinating story.

The ham-making tradition dates back to 2,000 years ago when the Roman Empire controlled most of Spain. Spanish ham was considered, even then, to be a delicacy. Initially it was only the royalty and clergy who could enjoy this special meal but in the 13th century it began to be more widely available. It is estimated that the average Spaniard now eats more than 7 pounds of cured ham each year.

Jamón comes from the back leg of the pig. The ham isn’t actually cooked but is dry-cured which means that the leg is trimmed and cleaned and then stacked in a barrel full of salt. It’s left there for a few weeks in order to remove as much moisture as possible. Following this, the salt is wiped off and the leg is left to hang and cure. Sounds simple? Take a good look round the variety of hams on offer. Would you know where to start?

There’s great confusion over the difference between these types of jamón. Many people new to Spain and Spanish tradition may think that they are, more or less, the same. There are, in fact many differences between the two and although Serrano ham is also a wonderful dish, it is generally considered to be inferior to the classic Iberian version.

Iberian ham can only come from Iberian pigs and can only be produced in Spain or Portugal. This is in contrast to Serrano ham which can be produced elsewhere. Why is Iberian ham so special? It is considered that some of the delicious taste that comes with Iberian ham is as a result of the way in which the fat is stored within the muscle of the pig. This, along with the special diet and the exercise that the pigs receive as they forage for their food, gives it its very special flavour.

Serrano ham comes from white pigs or cerdos blancos. You can tell that a ham is Serrano and from a white pig because its hoof will be white or light brown. The hoof is always kept on the leg at the bar, restaurant and, of course, in the shop so you can check the quality of the ham.

The white pigs are usually farmed intensively and eat grain-based pig feed. As a result of their breed and their diet the fat is separate from the meat rather than integrated into it. There is no marbling with Serrano ham and you’ll find pink meat alongside strips of pure white fat.

Iberian pigs (Cerdos Ibéricos) date back to medieval times. They are dark-haired and black-footed and produce a marbled meat that is considered to be much superior to your ordinary Serrano ham.

The Iberian pigs can roam freely in pastureland called a dehesa which is usually full of olive groves, acorn trees, chestnut trees and wild herbs. They have a ‘pigs’ life like no other, and for this reason it is claimed that the ham they provide is of the very best flavour and quality.

The pigs forage mostly on acorns and during peak season they can eat up to 20 pounds of them every day. It is considered that this diet is partly responsible for the nutty flavour of the meat. Even the fat that’s in Iberican ham is considered to be superior to your average animal fat as being plant-based.

Having established that there is a difference between Serrano and Iberian ham, why do the Iberian varieties command such very different prices? Not all the hams are equal. Iberian ham can be identified by four factors:

• The food it has eaten

• The fact that it is allowed to wander

• The slow, natural curing of the meat

These factors are used to determine the labelling of the pig’s leg before it is sold.  It is the colour of the tag attached to the leg in the supermarket that can help you identify just what type of Iberian ham you are looking at.

These hams have a black tag on their foot which indicates that the ham comes from a full-bred Iberian pig. It’s a mark of high quality and comes at a higher price too. A red tag means that although the pig has roamed free it is not genetically Iberian and will be a cross with another type of pig. Both these hams must have been cured for over three years.

These hams have a green tag and although the pigs will have been allowed to live and forage free range they will not have had a diet exclusively of acorns. Instead their food will include farmer supplements such as cereal-based feed.

These hams will have a white tag and the pigs may have eaten little or no acorns but will have been raised on grains and cereals. The meat must have been cured for at least two years.

By now we have hopefully established that the production of jamón is not a straight forward process and that there is a great deal to know behind the sliced meat on your plate. If this article has triggered your interest then you might want to find out more on La Ruta del Jabugo.

La Ruta del Jabugo takes its name from the town of Jabugo which is in the province of Huelva. It’s been created as a tourist attraction to allow people to find out more about the tradition, culture and cuisine associated with the Iberian pig. The Jabugo ham is considered to be the most celebrated and special of all the hams you’ll find on offer at this time of year. The name is even recognized by the European Union, wishing to preserve the origin and quality of product.

To the uninitiated, the story around Iberian ham can be shrouded in mystery. How can some slices of ham on a plate command such an important place in a society? This confusion is what the ‘Ruta del Jabugo’ aims to throw light on.

You have opportunity to see the Iberian pig in its natural habitat, witness the hams being cured and the associated procedures, and, of course, finally to taste the end product – perfectly prepared and cut – Iberian ham.

A tour tailored to you

The route includes a whole variety of experiences including seeing where the pigs live, viewing a drying room – where the ham is carefully stored and nurtured and finding out more about the history of the ham.

You can even get opportunity to talk with those responsible for creating this delicacy and, of course, try it out for yourself at breakfast, lunch and dinner. It’s not all about dining, however. You can also take walks and bike rides, relax or find out yourself how to cut a ham professionally. It’s a mix and match opportunity so it is perfect for all the family. You can either select from one of the tour packages on offer or design one for yourself, putting together the different elements that you prefer.

Altogether, there are 31 towns that are included in the route. Each one has its own special character and history linked to the ham production industry. The route begins at the headquarters of the Jabugo Society which is situated in an early 20th century building known as El Tiro, designed by the architect Aníbal González.

After that you can select where you wish to go or follow the route that will be suggested for you. It’s very much a bespoke experience rather than a laid-out tour – you can choose the order you would like to do things in and what to include and what to leave out.

If you are interested in the astounding nature of the area then there are also opportunities to enjoy the local countryside. You can either explore on foot or, if you prefer, you can also follow the route on horseback. You can add a little additional spice to the experience too by including a zip wire, archery or kayak activity in the area of the Aracena reservoir.

It is also worth stopping by the many mountain villages and finding out more about their distinct heritages. Particularly recommended comes Almonaster la Real which includes a castle, church and a mosque. Other recommended monuments include the Cortegana castle which is celebrated as one of the best preserved in the area and the Aracena castle or Sancho fortress.

The Museo del Jamón (ham museum) is situated in the centre of Aracena. Here you will find information about the breeding process, the pig’s life out at pasture, its diet and how they are finally killed. You can discover how the curing and production process takes place and how the hams are matured ready to eat in their own cellars.

If you are looking for an experience that enables you to understand an important aspect of Spanish culture whilst enjoying the countryside, Spanish  heritage and the best dining, then this could be the perfect tour for you.

Tags: Huelva, Jabugo Jam, Tour
Previous Article
We use cookies to ensure that we give you the best experience on our website. If you continue to use this site we will assume that you are happy with it.OkPrivacy policy