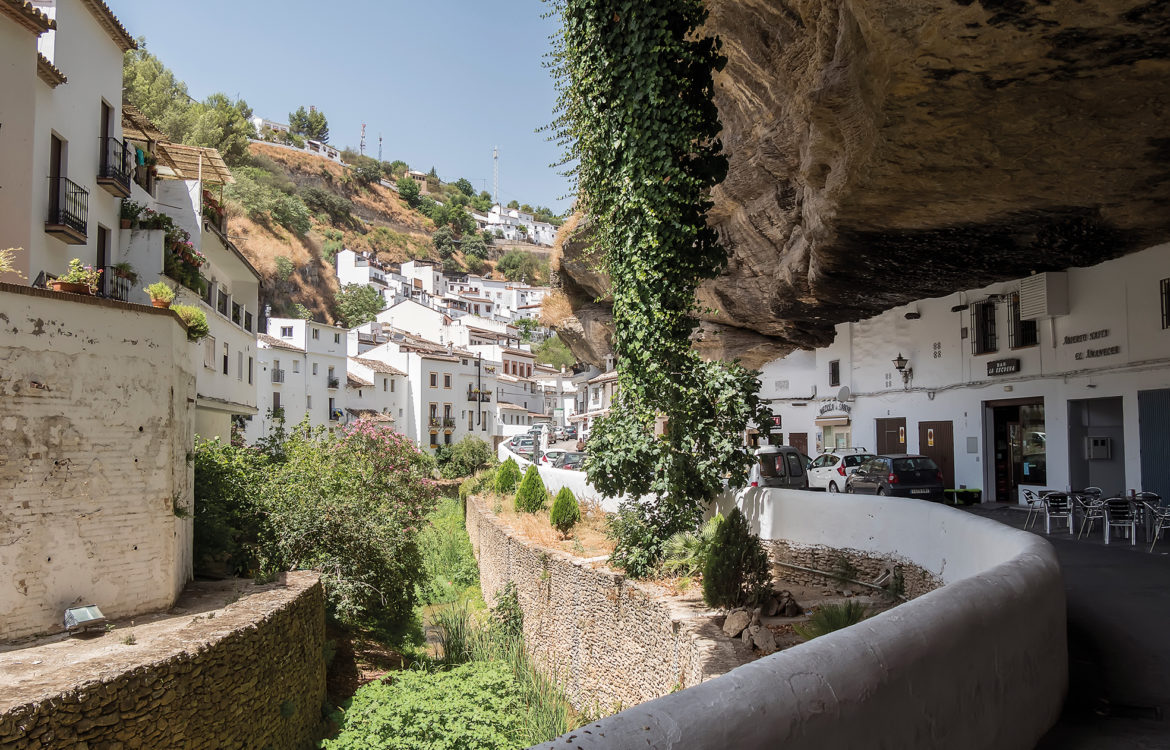 Nestling in the shadow of a huge rock, Setenil de las Bodegas is a fascinating village in the Cadiz province, Andalucia. The white-washed houses of this charming place appear to be carved out of the rock itself. You can take tapas in one of the bars snuggling beneath the stone ceiling or explore the surrounding countryside choosing from one of the many routes available.

Setenil has a history to match its unusual features. Its castle is evidence of the battles for possession that took place here, dating back to the 12th century. You can find, monasteries and churches to visit, all with stories to tell of conquests and invasions. This village has something for everyone whether you are a hiker, a historian or just want to enjoy a Spanish town with a difference.

We’ve all seen the pictures of Andalucian hillsides dotted with quaint, white houses. These images of the Spanish countryside have you looking online and booking your flight. White-washed villages don’t get much more picturesque than Setenil de Las Bodegas. It’s a traditional ‘pueblo blanco’ nestling in the cliffs deep within the Cádiz Province.

The most stunning features of this little Andalucian town are the overhanging rocks under which its buildings cluster. These dramatic rock formations make you wonder how they can exist without toppling down into the valleys. Setencil really does give you the impression that the gods carved it into the hillside.

The origins of this fascinating little town are almost as intriguing as the landscape. It dates back to at least the 12th century and has seen its fair share of invasion, siege and sacking. The name itself evokes times of unrest. ‘Setenil’ is thought to have come from Latin to mean ‘seven times no’.

Looking at this tranquil little town now, it’s certainly left its years of skirmish behind it. However, you can still see some traces of its turbulent past if you climb up to the Moorish castle. Both in the town and around it there are plenty of things to see.

You will want to explore the higgledy piggledy labyrinth of houses that climb up the rock on either side of the Guadalporcún River. You will want to stroll along Cuevas de la Sombra Street and Cuevas del Sol Street and marvel at the little houses embedded in the surrounding rock. Wherever you look, rocks frame the picture. The houses, shops and bars are literally sculpted into the landscape.

For a full and up-to-date list of what to see you are advised to go to the Tourist Information Centre (Oficina de Turismo). There you can find out about the cave houses in the town and even arrange to visit one. The castle might be in ruins but it is still worth seeing for the views alone. Visit the old town hall built in the 16th century, the Saint Román Caves and the Triana Bridge which dates back to the 13th Century.

After your sight-seeing why not take a tostada in one of the bars and restaurants that snuggle underneath the overhanging rocks or in the attractive Plaza de Andalucía. Alternatively try some of the locally-produced food. Try local chorizo along with a salad made from fresh vegetables grown around the town.

Apart from enjoying Setenil’s culinary delights you will want to explore this unusual landscape. The centre of the town consists of a maze of steep, twisting streets. You do need a reasonable level of fitness to be able to fully appreciate the twists and turns of this amazing rabbit warren.

If you enjoy a hike then there are many different routes that the tourist office can recommend to you. Some of these are believed to have originally been navigated by bandits and later by cattle and their herdsmen. There is plenty of wildlife and rich countryside to explore, offering both challenging and less-demanding routes.

Setenil does have a small selection of hotels where you might choose to stay if you like to be catered for rather than self-catering. There is also a number of villas, holiday homes, casas rurales and apartments that you can rent for a few days or a longer stay if you prefer.

Of course, you don’t have to stay in the town itself. There are plenty of nearby options that provide you with easy access not only to Setenil but some of the other local towns and villages that are also worthy of exploration.

Depending on where you’re based there are a number of day-trips and excursions that are organised from other local centres and cities in Andalucia. You can browse the best and most convenient of these on sites such as Tripadvisor. Many offer a two-stop option that takes in the stunning city of Ronda too.

Whether you make Setenil de la Bodegas a one-stop trip or include it in a lengthier tour of the area, do pay this unusual little village a visit. It will take your breath away.