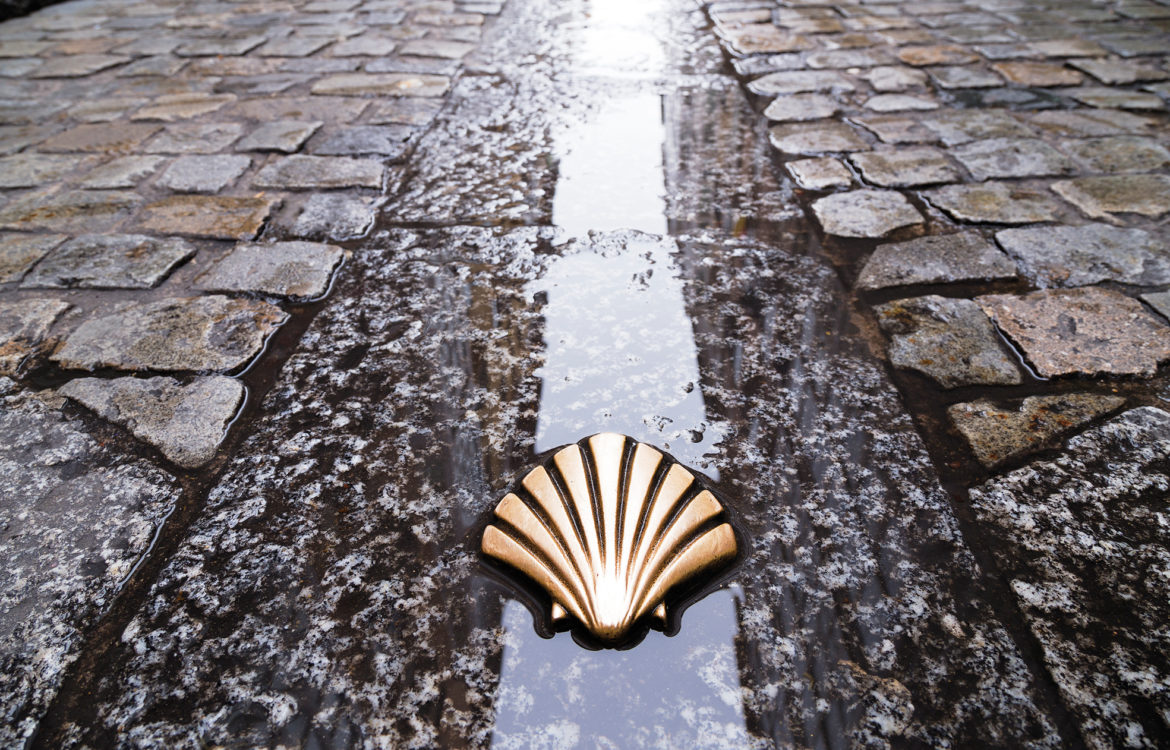 I first heard about the Camino de Santiago about 25 years ago in one of my Spanish classes at school and it has always stuck in my mind.

I haven’t done it yet, or any part of it, but I will. Back then, if you had mentioned the Camino de Santiago to anyone, most wouldn’t have had a clue what you were talking about, but these days many people have heard the name, read about it, seen a film or documentary or done it themselves.

So, what exactly is the famous Camino de Santiago?

The Road to Santiago

The Camino de Santiago goes by a number of different names: The Road to Santiago, The Way of Saint James, Saint James’ Path and the Route of Santiago de Compostela, to name just a few.

The Camino de Santiago is actually the name of a network of ancient pilgrim routes that start in various locations but which all end up at the Cathedral of Santiago de Compostela in Galicia in the northwest of Spain.

According to ancient legend, the remains of Christ’s apostle, Saint James the Great, were brought to Galicia in 813 and buried there. Hundreds of years later, the relics of the apostle were found and a shrine and the cathedral were built on the site in his honour.

The Camino Francés is the most popular route and the most famous. During the Middle Ages, many pilgrims started the route in France, even as far up as Paris. However, today, there are several spots along the Spanish – French border at the Pyrenees that are considered important starting places for the route. They are Saint-Jean-Pied-de-Port or the Somport Pass, Roncesvalles and Jaca.

The distance from the Pyrenees to the Cathedral at Santiago de Compostela is approximately 800km.

The Northern Route runs along the top of Spain, parallel to the Bay of Biscay coastline, although it also dips inland in some places. This is not one of the most popular routes of the Camino, which means that it doesn’t get as overcrowded as some of the others, but it is one of the most breath-taking visually. The Camino del Norte is the second longest, after the Ruta de la Plata, and one of the oldest. Tradition says that this route was used by travellers and pilgrims that wanted to avoid lands further south that were ruled and occupied by the Moors.

The Camino del Norte starts in Irún, which is the first stage, and ends in Santiago de Compostela. Popular stop-off points and places of interest along this camino include: San Sebastián, Guernica, Bilbao, Santander, Gijón, Aviles and Ribadeo.

This is a short branch of the Camino de Santiago that starts in France at Oleron Sainte Marie and joins the Camino Francés at Puente la Reina, in Navarra. This part of the route is about 225km and covers a range of various landscapes including mountain passes and flat river valleys. This is also a less-travelled route, giving the pilgrim a real sense of freedom, isolation and oneness. Points along the way include: Somport, Jaca, Sanguesa and Monreal.

This is the longest route of the Camino de Santiago and not really one of the main ones. It starts in Seville in the southern region of Andalucía and travels upwards through Extremadura and Castilla y León, covering the whole of the west of Spain. At Zamora, pilgrims can choose whether they want to continue north along the same route or join the Camino Francés. Both routes travel around 1,000km in distance. Some of the main highlights of the route include: Sevilla, Mérida, Cáceres, Salamanca, Zamora and Ourense.

Why do the Camino de Santiago

There are many reasons why millions of people set off from their chosen location and do the Camino de Santiago. One of the main reasons is for spiritual purposes. Walking the route alone for several weeks can be a healing and often extremely spiritually awakening experience for many.

Others choose to carry out the walk, or part of it, due to their love of walking or to raise money for charity. Many of them also find spirituality along the way, although they didn’t necessarily set out to do so.

Obviously, there are those, the same as in the Middle Ages and through history, that have walked the Way of Saint James for religious purposes and to find peace with themselves. Also to pay homage to Saint James once they arrive in Santiago. However, you don’t have to be ‘religious’ to do the walk; anyone can do it.

Some travellers just want to visit Spain, and what better way than seeing the real Spain than doing this walk. Others are influenced by their love of art, architecture, history, nature, and sport, or see it as a personal challenge that they want to achieve for themselves.

Whatever the reason, doing the Camino de Santiago will be one of the most unforgettable and amazing experiences in their lives, without a doubt.

How many people complete the Camino de Santiago each year?

During the Middle Ages around half a million pilgrims a year left their home from wherever they lived around Europe and travelled to Santiago on one of the routes mentioned above. In more modern times like today, around 200,000 people a year from all over the world complete all or part of the Camino. This number is gradually rising each year as the route becomes more popular and a greater number of people know about it.

How long does it take?

Well, this isn’t exactly an easy question as there are many determining factors such as how fit you are, whether you want to sightsee as well as walk, which part of the Camino you carry out, etc.

However, as a basic guide, taking the Camino Francés and starting at Saint Jean Pied de Port and ending up in Santiago de Compostela, you will need around 28 – 32 days. This means you will be walking somewhere between 23 and 27km a day. Obviously, there may be days when you walk more and others when you walk less.

How to travel the Camino de Santiago

Most people walk the Camino de Santiago, however, it is possible to cycle the route and even catch a bus or train for certain parts of it. The really brave can travel by horseback.

There are many places along all the routes leading to Santiago de Compostela that pilgrims can get their heads down for the night. The most popular choice, particularly for those on a budget, is to stay in one of the pilgrim’s hotels, or albergues. These are dormitories with several beds in them that offer just one overnight stay for all those that hold a ‘credencial’, or pilgrim’s passport.

Most of the albergues charge in the range of 6 to 10 euro a night, although some operate on a donations system. For this, the traveller is provided with a bed, shower and washing facilities and, in some cases, a kitchen to prepare their own food. Guests are expected to leave at 8am.

If the pilgrim hostels are full, which they may well be on popular routes and at certain times of the year, there are other private hotels and small hotels that offer cheap accommodation.

If you don’t want to carry your rucksack or luggage with you all along the whole of the route, it is possible to pay for your bags to be transported from one private hotel to another, so long as you have your route planned out. The system is actually very efficient and reasonably priced.

What is the ‘credencial’?

The ‘credencial’ or pilgrim’s passport as it is known in English, is a document, like a certificate, that you can purchase for just a few euro from a travel agency, church or hostel along the route. It is like a map that tracks your journey along the Camino de Santiago. You get it stamped at each resting point and it also gives you the option of staying in a pilgrim’s hostel for a cheaper price if you want to. Once you arrive in Santiago de Compostela at the cathedral, you must hand the passport in and it will be exchanged for a certificate of completion (La Compostela), provided that you can prove that you have walked the last 100km of the route.

A Mass is held every single day at 12pm inside the Santiago de Compostela Cathedral for the pilgrims. For those who completed the route the day before, the country which they come from and the place at which they started the route are read out.

How much money will I need?

As the majority of the time will be spent walking, you won’t need to spend a lot of money if you don’t want to. It is possible to pay for food and accommodation and only spend around 25 – 30 euro a day.

Things to bear in mind and consider

Whether you are fit enough, it may be wise to consult with your doctor if you are unsure. Wear good walking shoes, take a first-aid kit with plasters. Plan your route before you leave, including where you are going to stay, think about the number of people along a certain route. The time of year – summer may be too hot; winter too cold and harsh. Work out your budget. Ensure that you have your pilgrim’s passport, this can be ordered by post before leaving. Buy a guide book and map, start training months before you leave. Don’t forget your mobile phone and charger, take your passport and a photocopy and learn some basic Spanish phrases.