Chelva will make you fall in love

Chelva will make you fall in love 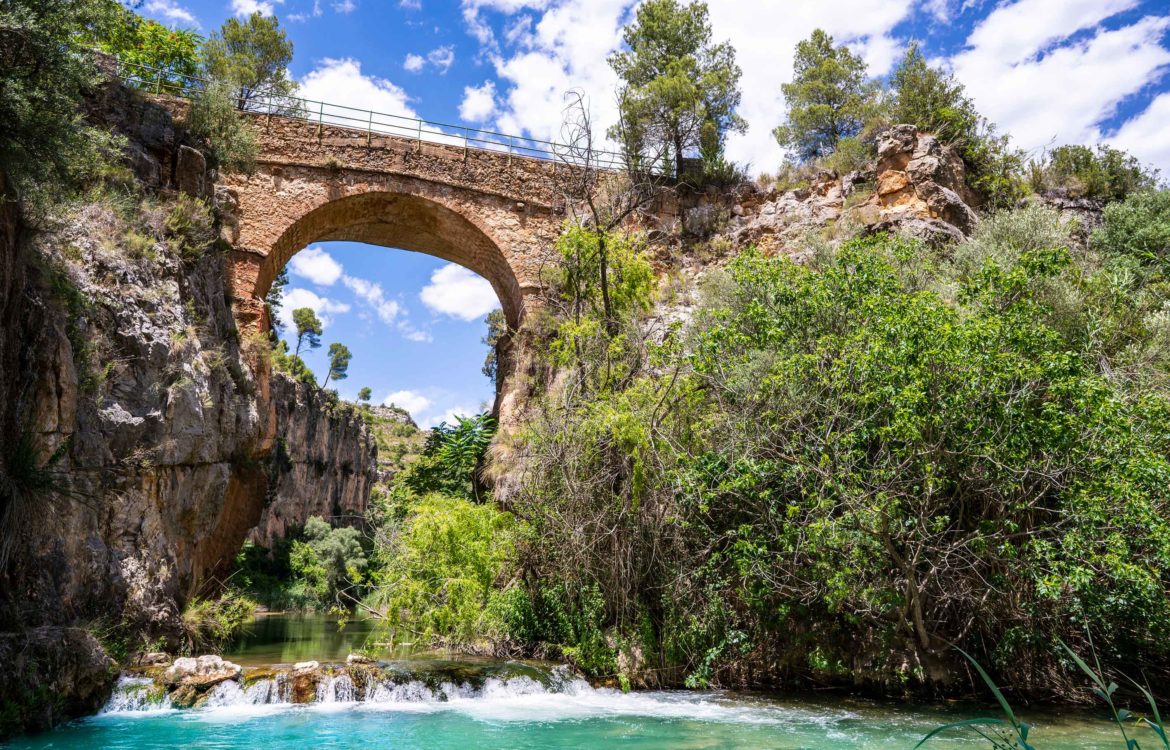 One of the most intriguing things about Spain is that there are so many ‘hidden gems’. In this article we’d like to introduce you to one of our favourites, Chelva. A town of cultural richness and historical significance, set in the beautiful Valencian countryside.  Imagine a traditional Spanish town within a stunning rocky landscape having trails for walking, swimming and wine tasting. Sounds good? Chelva and its surrounding countryside may not be very well known but are definitely worth a visit by those seeking to discover traditional Spain. .

Chelva is a town within the Valencian community and lies around 64km from the city of Valencia itself. Although it is surrounded by hills, much of the town is on flat land. The area combines some of the best opportunities for enjoying nature whilst also visiting its historical buildings and relics of times gone by.

The town is surrounded by some impressive countryside which you can enjoy on your own or with a tour guide. There are many established walking routes here, most being suitable for families with some a little more challenging for the experienced hiker.

There are two rivers flowing through the area. The River Chelva and the Turia River. You’ll also find a number of natural springs such as Berra, Gitana and Cortina. The town basks in the shadows of three mountains, the Cerro de la Nevera, La Atalaya and the Pico del Remedio. These features make for some ideal walking and hiking routes which you can select from the town’s website.

The ‘ruta del agua’ (water route) includes a number of hiking trails with some breath-taking scenery. You can choose your route to include easy or more challenging trails depending on your experience, age and group size. The route begins in the Plaza Mayor (the main square) and it will take you through the four cultural quarters of this town. It’s a circular route so you can leave your car here and return to it later.

If you do take the ‘ruta del agua’ then you can stop by the Molino Puerto where you can relax a little in the picnic area. You’ll also find a bar here, playground and toilets. As its name suggests, there was once an old mill here, dating back to the medieval period. You can still see the remains of the mill which was in use until the middle of the 20th century.

A little further along you will find the Playeta where you can swim and walk through the Olinches tunnel which was dug into the mountain and is of around 100 metres in length. The ceiling is low and the tunnel is dark so it’s a good idea to take a torch to light up the path.

There are a number of water features to admire in and around Chelva. For one of the most spectacular waterfalls, you should visit the stunning Chorros del Barchel. Although it is manmade, it is impressive in its drop and is worth taking a slight detour to get closer.

The Acueducto de la Pena Cortada is a Roman aqueduct from which you have spectacular views of the canyon below. The surrounding countryside is both dramatic and impressive and there are various tour providers who will take you on an accompanied hike if you prefer a guided experience.

There is a route dedicated to discovering public laundries. There are seven such laundries in Chelva and most of them are actually still used. They were constructed  for community use and had an important role in improving hygiene and sanitary conditions in the 19th and 20th centuries.

Route 91 takes you from Chelva to one of the highest local peaks of Pico del Remedio. In order to reach this high vantage point you need to cross some densely wooded areas and the Rambla of Alcotas which is believed to be of geological importance. Route 91 has its own restaurant and its recreational area boasts fantastic views of the surrounding countryside.

Whichever route you take, or even if you don’t go in for the walking, you can find a number of picnic areas dotted around the town with benches and tables for a cheap day out in the countryside. Some of them also have play equipment, parking areas and in some cases, a little kiosk for those extras you’ve forgotten.

Chelva dates back to 11th century and was originally an important town during Moorish control. Over the centuries it built up its defences including the surrounding walls which you can still see today. You can find out more in its museum which was converted from a hospital in the 16th century. It includes 11 cabinets which each mark the story of an epoque in the town’s history up until the civil war.

Relics of the civil war do still exist here and you can visit a refuge 8 metres underground. Visiting the narrow passageway and the room where people hid you can appreciate the cramped conditions and the state of fear that people must have experienced during this time. In the early 20th Century the population of the town was at its peak. Since then some of its younger population has moved out to areas with more job opportunities and to the bigger cities. One of the ways in which this bustling little town is being kept alive is through its attraction to tourists and visitors and you can see pictures of the monuments and walking routes written about here on its website https://www.turismochelva.es/ and https://www.comunitatvalenciana.com/en/valencia/chelva

A town of different cultures

Chelva perfectly reflects the influences of different religions and sections of society over the centuries. Buildings dedicated to one faith may then have become transformed into places of worship for another. For example, the Mezquita of Benaeça, built in 1370 was converted for Christian services in 1525 and in 2001 was restored to now provide a space for performances, exhibitions and presentations. The Mezquita still retains its original structure and is reputed to be the oldest in the Valencian Community. There are four distinct districts, each with its own personality. You can still see the remains of Muslim influence in the Muslim quarter of Arrabal and the Arab quarter of Benacacira with its narrow, winding streets, fountains and whitewashed houses. The Jewish quarter ‘El Azoque’ also has narrow streets that reflect the closeness of the Jewish community.

The Christian Quarter is named Ollerias and there you’ll also find narrow streets, countless fountains and the whitewashed houses that characterise this delightful town. However, there is more of a sense of space in this neighbourhood than in some of the earlier developments. The Christian quarter was formed during the 14th century and its name ‘Ollerias’ comes from the kilns that were installed in its streets.

The main church in the town is dedicated to Nuestra Señora De los Ángeles and is an outstanding example of Valencian Baroque. It’s a big church, almost of cathedral dimensions, with building work started in 1626 it took 80 years to complete.The belltower is almost 60 metres high and contains a clock.

Whether you are sympathetic to the tradition of bullfighting or not, you may be interested to see the ‘plaza de Toros’ or the bull ring which is located in the outskirts of Chelva. The bullring was opened in 1909 and is one of the five that you can see in the Valenican community.

La Torrecilla is a tower on a hill north of Chelva. Its elevated position meant that it was a useful lookout point for spotting invaders across the valley. Along with the wall which surrounds the town, it’s a reminder of the important position of this settlement as a secure defence against marauders.

There are plenty of historic buildings and sites to see locally. The San Francisco monastery is also close to a popular swimming spot. The Hermitage of the Forsaken was built during the 17th Century and is said to have been built on the site of a Moor who was executed for murdering the viscount who was in love with a Moorish vassal.

Like all Spanish towns, Chelva holds on to its traditions and celebrations with enthusiasm. Its annual cycle of colourful events is definitely worth sampling if you have time.

The San Antón festival is perhaps one of its most celebrated. It includes bonfires lit by the local people and eating and drinking goes on until late into the night. A special feature of this festival is the opportunity to tell stories. Being held in January/ February time, it is perfect for sitting around a bonfire and basking in the oral tradition of storytelling.

One of the most unusual of the Chelva traditions is that celebrated during Holy week. On the first Sunday of Easter thousands of ‘aleluyas’ are thrown from the top of the church to the crowds underneath. These are small pieces of paper containing religious inscriptions and it is believed that it is lucky to place them behind your door in the shape of a cross.

The patron saint of the town is Our Lady of Remedio and she is celebrated during a week in August with a variety of activities, processions and bands performing. There are also a number of competitions held during the week including football, chess, fishing and even a marathon. As you would expect, the week culminates with a firework display. In recognition of the significance of Arab culture on the town, the Arab neighbourhood Arrabal has its own medieval festival in June. It consists of musical performances, workshops, exhibitions and, of course, its own medieval market.

Much of the area is covered by mountain, river and woodland, but you will also find a number of carefully tendered vineyards, some of which welcome visitors to their bodegas. Wine tourism is growing in popularity. This includes the opportunity to visit, sample wines and find out more about the winemaking industry. La bodega de Terra D’Art is located in the Valle de Ahillas and in normal circumstances is open to visitors. The visits last 1 hour and 30 minutes and you can sample two or three wines as well as enjoying some traditional ham, cheese and chorizo.

We hope that this has given you a real taster for the town of Chelva. It is an intriguing blend of rural, historic and cultural opportunities.