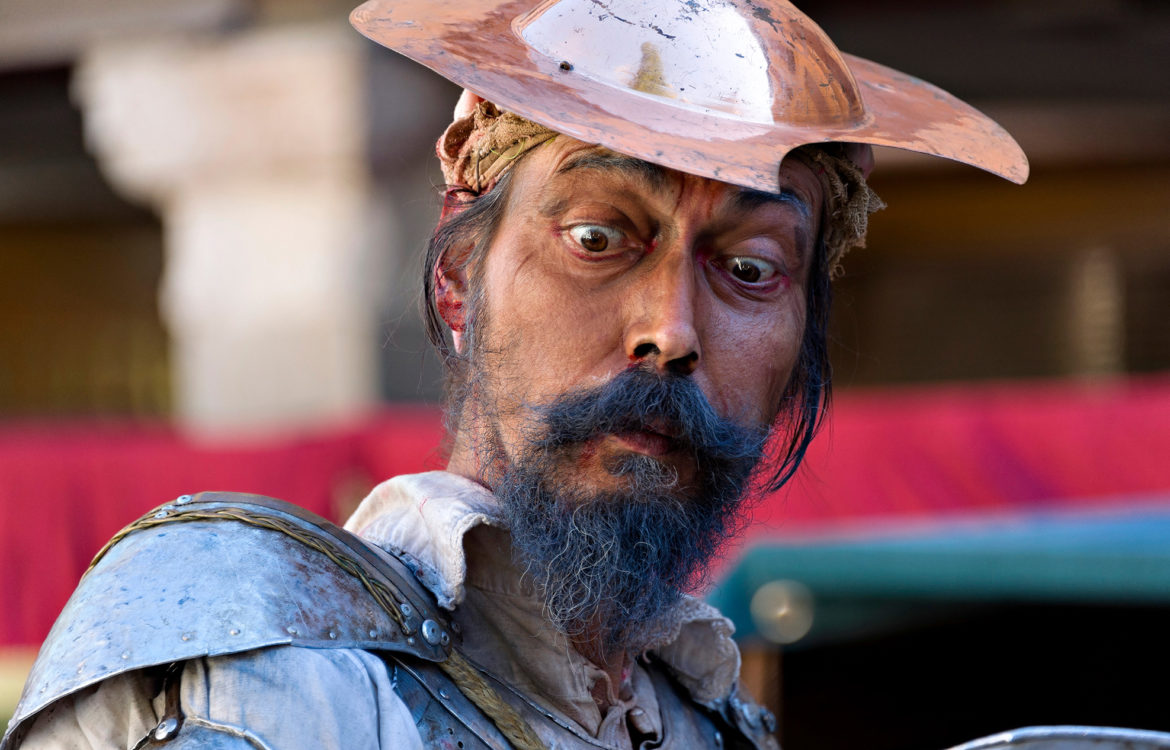 Don Quijote and its writer, Miguel de Cervantes, are at the heart of Spanish culture. References to the story and its characters can be found in every part of the country. In this article we give you a flavour of what it’s all about and encourage you to find out more.

If you have spent any reasonable amount of time in Spain you must have come across the story of Don Quijote or Don Quixote, as it’s sometimes spelt. Written by Cervantes, this story is famous throughout the world and is the second most frequently translated book, the Bible being first.

The full title of the book is ‘Don Quijote de la Mancha’ and references to it and its author are weaved into Spanish society. The organisation given the task of guarding the Spanish language is called the Instituto Cervantes and you’ll find reference to the story in street names and plazas all over Spain.

Like Shakespeare in the UK, studying the text is a must for children in Spanish school and, like the best texts, it has many features that appeal on a number of different levels. On one level, that children can appreciate in particular, is its humour. But on another, we have two systems meeting each other in person– the old and the new.

The purpose of this article isn’t to provide an in-depth analysis of a text that must have been critiqued and examined in detail the world over. However, knowing something of its content and why it’s so special can increase your understanding of the Spanish language and Spanish people.

His full name was Miguel de Cervantes (1547-1616) and he is generally given the distinction of being the greatest Spanish writer. In spite of this, he wasn’t a rich man during most of his lifetime although he did experience plenty of adventures of his own. He served as a soldier and was held captive for five years by Barbary pirates – enough to get anyone writing.

His varied experiences weren’t confined to the sea, as he went on to eventually be a government tax collector. Perhaps a strange choice of career for someone who seemed to verge on the wrong side of the law.

Like Shakespeare, a large part of his early life remains a mystery. It is believed that his father, Rodrigo, was often in debt and in fact spent time in prison for this. Cervantes was one of seven children and his mother, who lived to be 73, had apparently more of an eye for business than her husband.

Cervantes originally lived in Córdoba with his family who later moved to Madrid. There is some mystery as to why Cervantes left Madrid but it has been suggested that he was charged with wounding someone in a duel. He then went on to Rome and subsequently became a military commander in Naples from where he was injured at sea.In another colourful turn of events his ship was captured by pirates and he was taken to Algiers to be either sold as a slave or held for ransom – whichever brought in more money.

His brother, who was also on the ship with him, was ransomed but Cervantes’ family couldn’t afford to bail out two and it wasn’t until almost five years later that he was finally released. Elements of trouble certainly followed in his wake and as a tax inspector he was jailed for ‘irregularities’ on occasions. He ended his days in Madrid with what was possibly diabetes.

Although he is known to have written plays and poems, it’s the book Don Quijote that he is best known for. This did get some recognition during his lifetime and became popular partly due to his use of everyday speech, which was quite unusual at the time.

Who was Don Quijote?

Don Quijote, or Alonso Quixano to give him his real rather than assumed name, is introduced to us as a well-read man when it comes to knights and their conquests. In his later years, approaching 50, he decides that he too would like to experience adventure. And so, he sets out onto the plains of La Mancha with the determination to revive chivalry and serve his nation.

With his horse, grandly named Rosinante but more a bag of bones, his mission is to rescue damsels in distress and make a name for himself. But not everything is as it might seem. He misreads and misunderstands in great proportions. Having difficulty separating reality from fantasy, every adventure is a humorous, yet embarrassing farce.

Accompanied by Sancho Panza, a poor local farmer, Don Quijote’s failing eyesight means that he mistakes windmills for giants and sheep for men. He believes than an inn is a castle and that the women there are ladies in waiting rather than the prostitutes that they actually are. It’s not always his eyesight that is responsible for the mistaken identity of many different characters who he meets.

The books is actually in two parts with the first being more farcical than the second. In the second part, the story includes that Don Quijote is now famous due to the publication of the first part. The characters already know something of him when they engage with him and deceive him for entertainment.

Finally, Don Quixote does return to his village, recovers his sanity and apologises for the harm he has caused. He dies shortly afterwards, leaving the provision in his will that if his niece should marry a man who reads books about chivalry then she will be disinherited.

Considering the time in which it was set, it is perhaps extraordinary that Don Quijote didn’t meet his end sooner. Many of the stories culminate with him, and Sancho Panza being beaten and there are many humiliating episodes. Don Quijote is shielded to some extent by his lack of understanding of what’s really happening.

What’s so good about it?

Do we sympathise with his character? Yes. In spite of his overarching ambition, occasional arrogance and false aspirations, there is a sadness about the story and the attempts of this little man to be something grander towards the end of his life. Who has not felt that last ditch wish to do something extraordinary?

Through these characters, Cervantes has the opportunity to have a dig at some traditional establishments too. For example, when his niece, housekeeper and the parish priest decide to burn most of Don Quijote’s books to prevent his further adventures. The priest appears to know rather a lot about the content of some of the more ‘illicit’ material.

In many of the stories, in spite of the wildness of Don Quijote’s imagination, those drawn into his adventures are forced to ‘play along’ and become complicit in order to ease and escape the crazy situations in which they’re placed. For example, the inn keeper who agrees to ‘knight’ Don Quijote and the lady who orders friars to ‘surrender’ to him rather than the battle continue.

There is a sense of two cultures in the book. The old and the new meet each other face to face, or at least sideways on. There’s confusion that comes not only from poor eyesight and ageing but growing up in a different era. It explores different themes and everyone will find something that rings a bell for them.

Particularly celebrated as a feature of the book is the more ‘down to earth’ language of the peasant Sancho Panza which coexists alongside the more ‘cultured’ language of Don Quijote himself. A contrast, that’s also played out in Shakespeare’s plays and marked the arrival of the popular alongside the classic.

If you are searching for something to do in these rather austere times, then taking up a Cervantes trail, albeit a virtual one, could be a good idea. There is no end of information about him on the internet and his work has inspired plays, films and a variety of other artwork.

The novel was a source of inspiration for Pablo Picasso, Richard Strauss, Franz Kafka, Mark Twain and Salvador Dali. Picasso created a sketch of Don Quixote with Sancho Panza in 1955. The black and white drawing is less complex than many of his oil paintings and the two characters are instantly recognisable.

In 1897 Richard Strauss composed a score of 45 minutes for cello, viola and orchestra and depicts the scene where Don Quijote encounters a herd of sheep and thinks they are an approaching army. Franz Kafka published a short story in 1931 entitled ‘The Truth about Sancho Panza’ and it is thought that Don Quijote influenced Mark Twain’s Adventures of Tom Sawyer and Huckleberry Finn.

There are relics, reminders and monuments throughout Spain. You can see the bronze statues of Don Quijote and Sancho Panza in Madrid’s Plaza de España – the sight of which reminds you of the comic contrast between the small and stout Sancho and his mule and the aging, gaunt Don Quijote. La Posada del Potro is a traditional 15th century house in Cordoba that is mentioned in the book. Some if it has been preserved so that you can see how such a dwelling would have functioned in this era.

If you are to become a Cervantes aficionado then a visit to the Cervantes House Museum in Madrid is a must. This museum is actually on the site of his birthplace and it’s a living museum with rooms set out as they would have been at the time that Cervantes was writing. You can also, usually, see some live events there including plays and musical shows.

Could it really be the case that both Shakespeare and Cervantes died on the same date? There is some confusion regarding the use of different calendars, but 23rd April 1616 seems to be credited with the loss of them both. Consequently, World Book Day is traditionally held on April 23rd and this date also marks Saint George’s Day and UN Spanish language day. A very busy ‘day’ indeed.

Of course, the best way to begin to follow up your interest in Cervantes is to read Don Quijote if you haven’t read it already. You will find any number of versions of the classic at every different level and in every language. Take your pick. What is evident from the book is that Cervantes wanted it to be read, and not just by those who have a degree in literature.

On this website you can follow The Don Quixote Route around Spain. This will take you from Alcalá de Henares in the north and finishes in Ciudad Real, Almagro: https://www.spain.info/en/route/don-quixote/

If you want a whole list of Spanish places to visit if you’re tracing the history and legacy of Don Quijote you can visit the website: http://www.spainisculture.com/en/propuestas_culturales/cervantes-monumentos.html